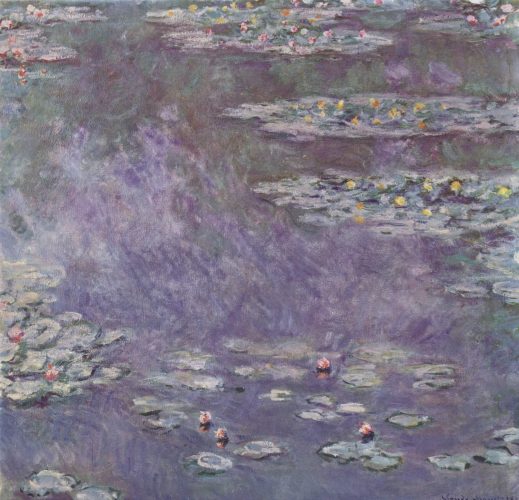 “I am obliged to continuous transformations. I follow nature without being able to grasp it” was Monet’s mantra, who obsessively kept coming back to the chosen theme of his beloved water lilies in many different variations. Monet used to observe his favourite flowers, which moreover were sacred to oriental religions, from the pond that had become a sort of earthly paradise in his farmstead in Giverny. The waterlilies became his form of prayer: a testament before his death at eighty-six years, after a lively creative period, a meditation on the theme of nature to try to understand what will be understood as nothingness, the deep mystery in itself, pure light. Monet studies and observes its subject en plein-air, aiming at investigating its mystery and giving us a lesson on humility: the artwork is not consumed while it is being painted, but instead pushes the artist to go further and investigate the actual essence of it.
His is a wearying research to which the artist dedicates his last energies before breaking down, allowing us to understand that, behind what we see, is hidden what cannot be reproduced in naturalistic terms, but is only understandable with the eyes of the soul.
Monet as the precursor of abstract art, where the limit of the line is lost, becoming one with the vibrating surface of the water, becoming indefinite, dematerializing himself, becoming evanescent.
“Beauty is in front of our eyes, in the present” said the critic Castagnary in 1867. It is exactly this universe of immeasurable beauty that Monet will crystallize in his canvases, with vivid spontaneity, capturing the instant effect of light and translating the poetics of the instant and immediacy that will characterize Impressionism.